Books are being self-published by LindaMcKownAuthor LLC. Book covers are purchased through Shutterstock.

Please check out the links for a preview of Chapter 1 of each book.

Use the Contact Linda page to leave comments or questions.

To read chapter 1 of a Book please click on the book cover image. 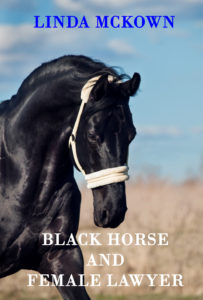 Claire Stevens was with Reg Morrow on a legal case in Argentina to visit their client, Saul Estevez. The client rescues her on his magnificent stead named Black Horse. Meeting Saul forever changes her life. Mr. Estevez does walk too close to the line regarding the law. In the normal world, he is known as a highly aggressive and unscrupulous businessman. He falls in love with Claire as does Mr. Morrow. Saul is forced to go to prison based on trumped-up charges by his enemies. Twenty years fly past and the man is released. Claire’s law firm moves her to Los Angeles where she meets Reg again. LA is the Morrow firm’s territory. Her new CEO forces Claire to join Reg’s firm. Their friendship grows into something more. Saul’s continual meetings with Claire drive Reg crazy. The FBI along with Reg are watching Saul as are his enemies. Claire gets caught in the crossfire when accidents and murders happen. Protection is important for survival. She wonders who she should trust. Claire makes her decision. 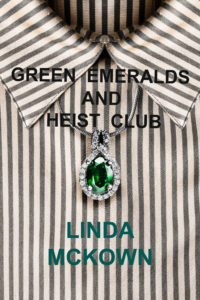 Sandra Delray knew her therapy sessions weren’t working. She went to her second grief and support group where she ran into women like herself. They formed their own club. Sandra began formulating a plan to enhance their lives. She convinced the women a heist would make them feel better. She knew an elderly woman who would be showing her emerald and diamond jewelry at a show in a hotel in Las Vegas, Nevada. Sandra’s club began casing two casinos. She ran into the first hotel manager, Craig Connor, who became suspicious of the women, especially Ms. Delray. There was something about her he couldn’t quite forget. When Sandra left his hotel, she looked at his security camera and dared him to follow. Craig’s interest increased after Ms. Kendrell’s thirty-five-million-dollars in jewelry were stolen before the show started. The luxurious hotel for the show was directly across the street from his hotel. The coincidence was too close. He decided to find the leader of the club.

White Boom and the Seagulls – by Linda Lou McKown
Synopsis 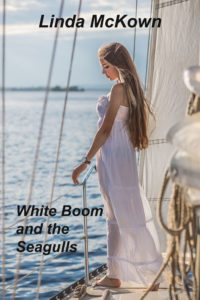 A woman knows when to wait. Emily Erin learned at an early age that life wasn’t meant to be perfect. At most, the best a person could do was take a leap of faith. The faster you run before jumping into the deepwater, the better. The cold is the first shock before you lose your life.

Struggling to forget a boyfriend, and her job moved elsewhere, Emily read a vacation brochure. Pushing her anxiety aside, she selected a three-week sailing cruise. Of course, if a person was going to take lessons, they should choose the largest body of water in North America called Lake Superior. The majestic beauty of the place was stunning at their starting point in the Apostle Islands. The sailboat would crisscross the lake hugging the shoreline with eight guests and a captain. At the end of the journey, there would be only one guest aboard. For Emily, the journey intertwined her life with several members of the crew and two young men. She would be forced to choose. Mysterious and dangerous things happened that pushed fate off track. Friends and enemies entered her life. The adventure changed everything.

Gold and the Spotted Jaguar – by Linda Lou McKown
Synopsis 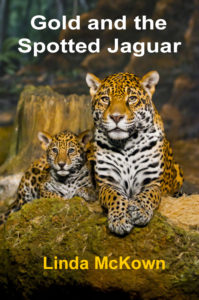 Sara Summers looked at the cologne bottle top. The shape reminded her of spots on a jaguar. Elusive and difficult to track were the words her husband, Tim, used to describe the large cat. The bottle reminded her of their last vacation trip together near Veracruz, Mexico, where Tim met with an accident. She felt heavy-laden with sadness and wanted to disappear. However, there would be more massive changes coming her way. Selling her home was the least of her worries. Unknown to her, Tim belonged to a highly secretive business venture before his untimely death. His partners were looking for a lost shipment. Sara was the person in real danger.

Enlisting her friends, they would return to Mexico. Sara and Natalya would use modeling jobs as their cover to research her husband’s prior activities. Tim’s half-brother, Taylor, was along for the ride. A character named Valentina Diaz wouldn’t take kindly to Sara and her friends snooping around. Valentina’s nefarious businesses could falter if discovery happened. Winning was all Valentina knew.

People who murdered, exchanged stolen goods, and moved money should be stopped. Except the sphere of Valentina’s influence was high and the local police were afraid of her. A U.S. federal agent would become involved when kidnapping, smuggling, illegal border crossing, and murder entered the picture. Baby jaguars were at risk.

Raiment Red and a Raven – by Linda Lou McKown
Synopsis 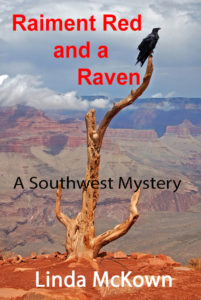 The snow reminded ancient people of the rhythm of the earth’s seasons in its final descent. They watched the birds who would roost or fly low when the temperature dropped. Earlier that day a track of blades went through a path in the woods. Others followed, packing the snow down. The mountain was almost quiet. Throngs of skiers left the runs in Aspen to eat dinner. One person stopped, set the trap, and waited for the opportune moment. Two female skiers approached. Weapons appeared, bodies fell, and blood splattered the fresh powder. The killer worried the snow wouldn’t hide two bodies. The colder air pushed the killer to leave.

Police arrived days later to find one body in the woods. Lisa Givens was dead, and Ali Zarin, a news media co-worker from Los Angeles was missing. Earlier in the day, Ali wore a long red dress in a photo shoot with a raven. The bird was enamored with the model as was the hidden person among the trees. No one saw the shadow.

The hunt for the missing woman would take Detective Moon and Constantine to Albuquerque. Unlocking secrets of a mastermind killer were the detectives usual work day. Suspects involved a taxidermist, birdman, and anyone connected to the deceased or living. Sheriff Cray, the local law enforcement officer pointed the two detectives to an older murder case at a ski resort. The sheriff and his buddy, Matlock, were friends with Grant Evans. Mr. Evans was a rich rancher possibly in love with Ali. The ranch and his properties would make excellent cover.

A wolf knows to wait to kill again. 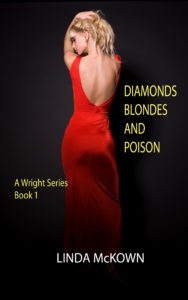 A murderer saw Jess Jameson in the Napa darkness. His evil green con artist eyes smiled, because she opened the game door to his obsessions. Los Angeles investigator, Derek Wright, pushed beyond his normal work routine, rescued the young woman from her attempts to retrieve a diamond heirloom. Using his police network, Dean Crain’s motorboat, helicopter, and crony families, the teams worked together chasing madness from Vegas to Rio. Dean steered the course to bring the two lost lovers to mutual ground. Derek and the Poisoner were drawn by the beautiful blonde woman. The scales kept tipping away from salvation. 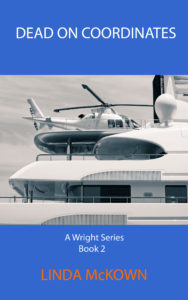 The Italians mistakenly searched the ocean near Africa for centuries while Louisa’s family held the key to the location of the treasure in a mahogany and brass telescope. Derek slowly unwrapped the fragile paper. The lost ship could be an insanely lucrative find, but perilous if others knew one of the coordinates was dead on. Submerging with their underwater craft was a fall-rise-fall thrill ride with more than just the creatures of the deep. 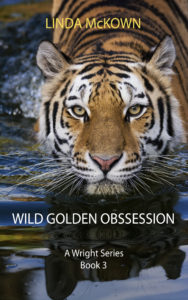 There was a legend long ago about a woman who loved tigers. She taught them how to traverse the river to new hunting grounds. The tigers named the beautiful female, Goddess, and gave her special powers in return for her help. This story is about another young woman who, unfortunately, made a mistake when she took two rare, golden antiquities. She felt it was payment for her time. Evil people disagreed and tracked her. They were close. Imminent danger existed no matter where she lived. Caught in a field, there was no means of escape. She could see the jungle man’s teeth in her nightmare. The pungent smell of early death surrounded her. The weeds enveloped her wounded body. She called out to her golden tiger. 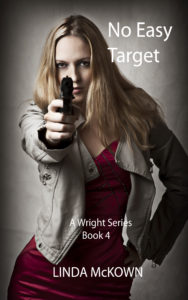 Gang mentality can be a veritable force with its own justice. Minnow Surf created his own force of thugs and thieves. He was one of those people who never learned and invested in illegal activities after prison. A Miami high roller, Matin Domingo, smuggled guns, marijuana, and drugs. As a business partner, Minnow was in deep trouble when the marijuana farm burned to the ground and his other theft operations failed. The Miami gangster wanted payment or else his falcons and bodyguards would turn him into mincemeat.
The Wrights moved their one hundred sixty-foot yacht from California to Curacao for safety reasons because Minnow had threatened the family. Minnow held a grudge against Derek. The police and Los Angeles investigator, Derek Wright, waited for Minnow to make his next move. It never occurred to them that Minnow would be on a gun smuggling job in Curacao at the same time. Minnow’s twisted attempt at murder was a surprise. No one was safe from the devious and nefarious plans made by Minnow, especially, Amy, his wife. Randy Moore, with his group of motorcycle friends, and several other third parties wanted their own revenge. The final trigger was a different type of justice. 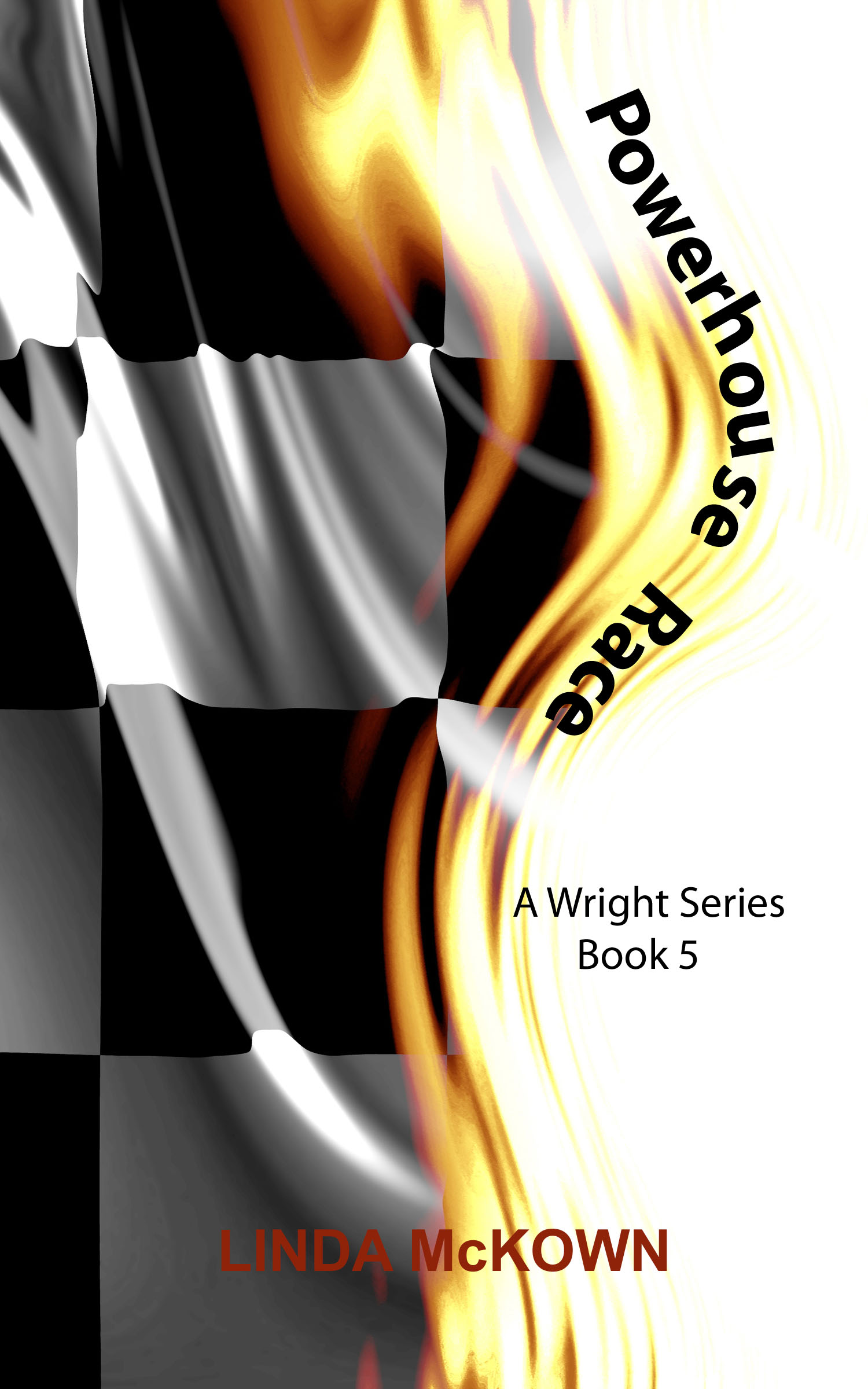 Racing, women, and a fast-paced life for Mic Palla was his usual norm. His hauler trailer went to Michigan, Miami, Phoenix, and Fontana. These were the final races of the season and money was there for the taking. That was until he met a young police graduate named Tiare. She was part of Derek Wright’s team investigating a mild poisoning targeted toward Mic. She was a red-haired beauty and much more than a tropical flower on a Polynesian island. Thwarting danger, a competitive driver named Dan, and Tiare’s boyfriend were the least of Mic’s problems. Winning and staying alive took precedence when accidents started happening at the tracks. There was more than one killer involved. There were former race car people, copycats, trackers, a politician, and Snake woman. Each race represented an opportunity for the killers to try again. The maze of trouble began with stolen sports cars, greed, and revenge. Interference was high on the list. There was more than the track heating up. 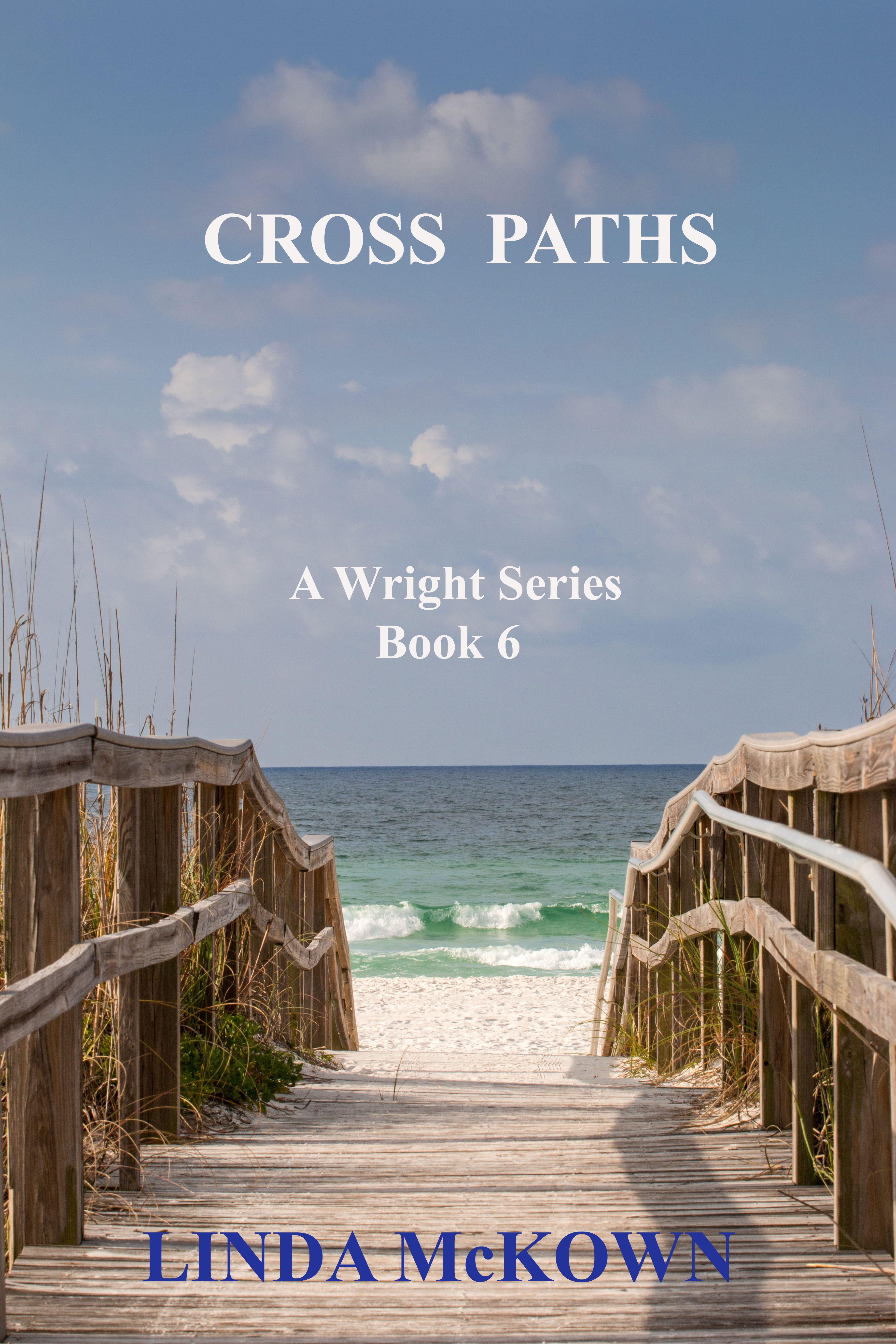 This book is not about the average, normal run-in that a person encounters in the world. One woman’s name is labeled and put in a police file. They don’t know her real name but know this psychopath’s molecular machinery is hardwired differently. They call her “Snake woman”. Derek Wright, the Los Angeles investigator, will cross paths, following her in a difficult labyrinth. He is obsessed about catching the thief and murderer before she can inflict more damage. The book is about surprises as she leads Derek through a different kind of pain. The circles of fate surround the players, enveloping them in the crosswinds. A heavy jolt spins her world when a small band of terrorists make their move. Her cunning, planning, and quest for gold and riches are temporarily put on hold. The dangerous snake watches and manipulates her arena. Like pawns in a chess game, her hot, boiling rage knocks the terrorists out of the game. The police can’t stop the constant flux of criminals in the ever-changing game of theft and deception. Only the lucky will survive the final round.